Comrades,
I shall presently deal with part of an issue that has become touchy in France. I dare say all my readers have heard of the Smurfs- the famed Comic-book Blue Dwarfs, so cute and harmless, and so popular in France. I also take it as self-obvious that my readers know the definition of Communism- I suppose I shouldn't take that for granted...Communism is the belief that goods should not be privately owned, but distributed equally by the state. It abolishes all money, and all differences between members of the society; and people work not because of personal gain but simply because they believe that's what they were born to do. 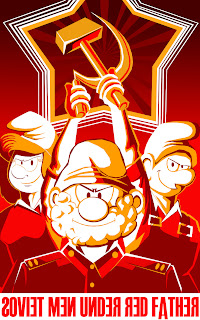 So, that definition in mind, I shall now proceed to explain how Pierre Peyo made his Smurfs Communist- I would ask you (not mentioning any names) to restrain your outrages and tutting contempt until you've heard me out.
I may begin by pointing out the all-are-equal part of the Smurfs. All wear the same clothing, sing the same songs, do the same work. Many and most of the comics talk about a Smurf who wants to be different, and learns that this is not in his best interest. Read  A Smurf unlike the Others,  the Smurfissime, The Reporter Smurf... Never will you find a Smurf whose difference makes him good. Smurfs do what they're best at, without any sort of choice- indeed, one comic book sees them swapping roles with a comrade- to devastating results.

But one Smurf rises above the others... the Grand Smurf, renamed Papa Smurf by English Translators, remains the only one allowed to pursue knowledge (read  Doctor Smurf, Reporter Smurf, the Smurf Apprentice,  and the Smurfs and the All-knowing Book) and the only one to have contact with the outside world. His authority is questioned only by those idiots who wish to rise above the society, and yet he is seen as equal to all his Smurfs (he eats in the same communal refectory, does the same work, and is subject to the same problems). A clear link can be drawn between him and Stalin, who- while in a position of grandiose power, was seen in the propaganda posters as equal to his brave workers and soldiers. The way Smurf Village is run reminds me heavily of the USSR- There is no private property, but all fields and houses belong to everyone. Papa Smurf sometimes tells Smurfs to give something to someone else- food, toys, even a house- and no objections are made. Can you make the link between this and the Communist state?
Everyone works at the dam- unless their vocation in life is to work somewhere else- and no-one is paid in any way, but Smurfs simply live off Greedy Smurf's and Farmer Smurf's work. Despite maintaining the whole village, Greedy Smurf doesn't receive anything more- and no-one ever raises that subject.
Of the Smurfs with an identity, many and most can be identified to Marxist and Communist ideals. Handy Smurf is the epitome of the Communist Worker- his skills are called for in all the village, he is constantly at work and never questions anything, and he never complains about his gross overworking. Hefty Smurf is the enforcer of Smurf Village- whenever someone needs power they rely on him. This casts him out as a NKVD (KGB) agent.

Smurf in Glasses- named  Brainy Smurf by the Translators. He constantly raises himself to a position of power equivalent to Papa Smurf while the latter is away, but his vanity and lack of wisdom make him a dictator or simply a twit. This is equivalent to Stalin's view of Trotsky- beware of those who want power, they probably aren't wise enough.

A few Smurfs represent non-communist ideas; Vanity Smurf is Marx's impression of a Bourgeois- constantly trying to make himself more popular at the expense of the Smurf Society; and the Smurfs with original ideas- the Finance Smurf, the Travelling Smurf, the Reporter Smurf- always have ideas going against Communist ideals; all these ideas fail.
This leads to the anti-Smurfs; Gargamel, and Azrael. Gargamel is obssessed with turning Smurfs into Gold, or making soup out of them to sell for a high price. His Evil sayings include 'I have a Machiavelical Idea', and 'I'll be rich! RICH, HAHAHAHA!' Gargamel epitomises the Evil Capitalist, making money-condemned by Communism- at the expense of others. His companion-the evil cat- is named after a Demon of Jewish and Islamic folklore. This not only brings to mind that the Russian Revolution was sponsored by Jewish Bankers and that Trotski, Lenin and Stalin all had Jewish parents; but also that Communist Russia was harsh on all religions ('Harsh' as in 'Concentration-camp harsh') and on Judaism in particular, eager to prove its independence from the Jewish bankers. One could also point out that Gargamel's constant mistreatment of Azrael shows the Communist view of how hierarchical Capitalist business is flawed- the poor worker constantly beaten by Evil bosses.
I would end this incriminating post, dear friend, by urging you to realise that any book, cartoon and film worth anything has a meaning and a message- never take the object at face value, but question its purpose and its origins. Else you will find yourself drinking in the words of the Marxist Papa Smurf- for, as Aquinas said, 'The Devil's most potent trick is to make you think he's not there'.
Yours McCarthically,